Readers will not need me to remind them that Britain has always been part of Europe — at least since the days of the supercontinent Pangea when all the landmass of the earth was glued together in one lump. That was about 335 million years ago and it began to break up some 175 million years ago. 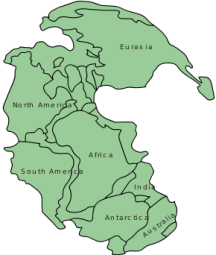 Britain (and let’s not forget Ireland) was too small to be affected by such massive tectonic events and so remained joined to the continent until after the last ‘Ice Age’ when, only a few thousand years ago, a bit of a flood covered the separating plain and, woohoo, we had the English Channel. And how handy that has been — not least because if you’re into paleontology you can dig up bits of Siberian woolly mammoths, who walked here before the flood, without trekking to Asia.

Thus almost, allegedly, Madame de Pompadour when, in 1757, matters French took a turn for the worse in the Seven Years’ War (getting thumped by the Prussians in the Battle of Rossbach). Things were graver than she thought because, long before that military setback, the French language had been going downhill — slightly surprising because, after the Norman Conquest of Britain you might have thought French was set to become the world’s lingua franca, so to speak. But it turned out that over the next 300 years the English spoken by the occupied peasants — albeit absorbing lots of French along the way — gradually evolved into the language of England on its way to becoming a world-beater. That’s what the authors of “1066 and All That” would describe as a ‘Good Thing’ — especially for us dumb Brits because we don’t have to remember which of three genders might apply to our cat.

But, sad to relate, we’ve drifted away from the continent in less happy ways, one of them coming to light only over the last few score years as our life span has increased dramatically and cancer has come to the fore as a major cause of death.

For many years a little publicised and rather disgraceful fact has been that UK cancer survival rates lag somewhere around 10% behind those for pretty well every other European country. In other words, for the last 50 years you were significantly more likely to die of cancer in the UK than in most European countries. In 1970 that ‘significantly’ was about 50% but since the late 1980s the difference has gradually come down to between 5% and 15% depending on the cancer and the country of comparison.

Breast cancer mortality rates for Britain and the European Union (age standardized). This shows the trend since 1970 and the predicted rates for 2019. The trends are similar for all cancer types taken together. From Malvezzi et al., 2019.

The cause of this lamentable state of affairs is a combination of factors: diagnosis at a later stage, perhaps because Britons are disinclined to seek medical advice, and quite wide variations in the standard of treatment across the UK being two. The latter has given rise to the sad reality of the post-code lottery. In real terms this means you’re twice as likely to die of cancer in Liverpool as in Kensington. It’s a formal possibility that in the UK we suffer from types of cancer that are more aggressive — i.e. more difficult to treat — than occur in Europe but there’s no evidence for this. In others words the problem is of our own making: how we look after ourselves and the efficiency of our health system.

Just in passing we should note this isn’t only a British problem. Not dissimilar variations occur, for example, across the states of America: Kentucky bad, Utah good (186 deaths per 100,000 population versus 120). But back to Europe.

Things are getting better!

All is not lost, however, as the most recent study has shown. For the EU the rates have been falling since the early 1990s and the picture is similar for the UK but with a more dramatic drop (hooray!) albeit starting from a much higher rate (boo). What’s more, the pattern is similar for all cancers taken together. Thus not only has the gap continued to narrow since 1970 but the prediction is that by 2019 the UK will well and truly have joined the European Union in that our overall cancer survival rate will be the same as for most EU countries. This good news is exemplified by the data for breast cancer shown in the graph.

So at long last on the cancer front we are about to join Europe — quite possibly at precisely the moment we brexit therefrom. How’s that for irony?!