Back in the nineteenth century a chap called Augustus De Morgan came up with a set of laws that, when explained in English, sound like the lyrics of a Flanders & Swann song. Opaque to non-maths nerds they may be but they helped to build the mathematics of logic, so next time you meet AND / OR gates in electronics, spare him a thought.

In fact Augustus is rare — maybe unique — among mathematicians in that he’s not completely forgotten, for it was he who penned the lines:

Given that we now know there’s over 2,500 species of fleas ranging in size from tiny to nearly one centimeter long, it may be literally true. But here, for once, the truth doesn’t matter. It’s a silly rhyme but nonsense verse it is not for it could well serve as a motto for biology because it really captures the essential truth of life: the exquisite choreography of living systems by which incomprehensible numbers of interactions come together to make them work.

Human fleas. Don’t worry: you’ll know if you have them.

Unbidden, De Morgan’s ditty came into my head as I was reading the latest research paper from David Lyden’s group, which he very kindly sent me ahead of publication this week. Avid readers will know the name for we have devoted several episodes (Keeping Cancer Catatonic, Scattering the Bad Seed and Holiday Reading (4) – Can We Make Resistance Futile) to the discoveries of his group in tackling one of the key questions in cancer — namely, how do tumour cells find their targets when they spread around the body? Key because it is this process of ‘metastasis’ that causes most (over 90%) of cancer deaths and if we knew how it worked maybe we could block it.

A succinct summary of those already condensed episodes would be: (1) cells in primary tumours release ‘messengers’ into the circulation that ‘tag’ metastatic sites before any cells actually leave the tumour, (2) the messengers that do the site-tagging are small sacs — mini cells — called exosomes, and (3) they find specific addresses by carrying protein labels (integrins) that home in to different organs — we represented that in the form of a tube train map in Lethal ZIP codes that pulled the whole story together.

The next small step

Now what the folks from Weill Cornell Medicine, New York, Sloan Kettering and a host of other places have done is adapt a flow system to look more closely at exosomes. 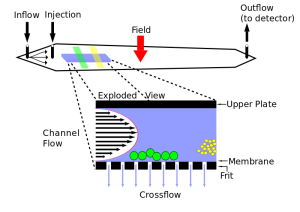 They found that a wide variety of tumour cell types secrete two distinct populations of exosomes — small (60-80 nanometres diameter) and large (90-120 nm). What’s more they found a third type of nanoparticle, smaller than exosomes (less than 50 nm) and without a membrane — so it’s a kind of blob of lipids and proteins (a micelle would be a more scientific term) — that they christened exomeres.

A perpetual problem in biology is reproducibility — that is, whether a new finding can be replicated independently by someone else. Or, put more crudely, do I believe this? This is such an important matter that it’s worth a separate blog but for the moment we’re OK because the results in this paper speak for themselves. First, by using electron microscopy, Lyden et al could actually look at what they’d isolated and indeed discerned three distinct nano-populations — which is how they were able to put the size limits on them.

But what’s most exciting in terms of the potential of these results is what’s in the packets. Looking at the fats (lipids), proteins and nucleic acids (DNA and RNA) they contained it’s clear that these are three distinct entities — which makes it very likely they have different effects.

Given their previous finding it must have been a great relief when Lyden & Co identified integrin address proteins in the two exosome sub-populations. But what’s really astonishing is the range of proteins born by these little chaps: something like 400 in exomeres, about 1000 in small exosomes and a similar number in the big ones — and the fact that each contained unique sets of proteins. The new guys — exomeres — carry among other proteins, metabolic enzymes so it’s possible that when they deliver their cargo it might be able to change the metabolic profile of its target. That could be important as we know such changes happen in cancer.

It’s a bewildering picture and working out even the basics of what these little guys do and how it influences cancer is, as we say, challenging. But I think I know a good man for the job!

Mathematicians have a bit of a tendency to look down on us experimentalists thrashing around in the undergrowth and I suspect that up in the celestial library, as old Augustus De Morgan thumbed through this latest paper, a slight smile might have come over his face and he could have been heard to murmur: “See, I told you.”