Robert Peston is a journalist familiar to followers of the BBC news for his idiosyncratic accounts of events in the world of business and economics whose speech style has been described as “excruciatingly hard to listen to”. I quite like it – not enough to imitate, mind you – but just in short bursts I love it, mainly because it carries the innuendo of ‘what a bunch of prats these people are’ – or is that just my default position when it comes to the world of high finance?

All that is slightly beside the very distressing point that his wife, the writer Siân Busby, died in September 2012 from lung cancer after a long illness. I suppose everyone finds their own ways of dealing with the most awful of tragedies. For Peston one response was to realize that most people know almost nothing about cancer which means that, when they have to face it in themselves or in their near family – as almost everyone has to – they’re very ill-equipped. The obvious place to start in rectifying this ignorance of both our own basic biology as well as what can go wrong to make cancer is in schools but a few enquiries revealed that there is, somewhat disgracefully, no centralized system in the UK for enabling scientists to talk to children.

He therefore set about creating such a system: a database of scientists willing to go to schools to talk about their area of interest that was christened “Speakers for Schools.” So dynamic was he that this revolutionary idea actually filtered through to the Vice Chancellor of the University of Cambridge, Professor Sir Leszek Borysiewicz, who, bless him, promptly signed up to Peston’s plan. Now far be it for me to convey that I’m on hob-nobbing terms with Boris but it did so happen that at a booze-up for folk who’d contributed to Cambridge’s Science Festival we got chatting and, as he’s a medic by background, the conversation naturally turned to telling the world about cells, molecules and cancer and before you could say ‘have another canapé VC’ I was signed up too.

So it came to pass that I found myself this week motoring to Bedford and my first “Speakers for Schools” gig. In so far as I was thinking about anything, apart from whether I might make it back to Cambridge for lunch, I suppose I had in mind that I know I give a decent and at least mildly entertaining spiel so that would be fine. Otherwise, inevitably, there was the lurking thought that Bedford is one of those places you try to go round, and not just to avoid its dire traffic – but then, if everywhere was as idyllic as Cambridge the world would be a tad tedious.

At which point something totally unexpected happened. After extracting myself from a housing estate or two, there stood before me Bedford Academy, formally opened in September 2010. Specializing in science and technology,  the school has been completely rebuilt at a cost over £27 million – and my goodness that shows. It’s just a spectacular building. 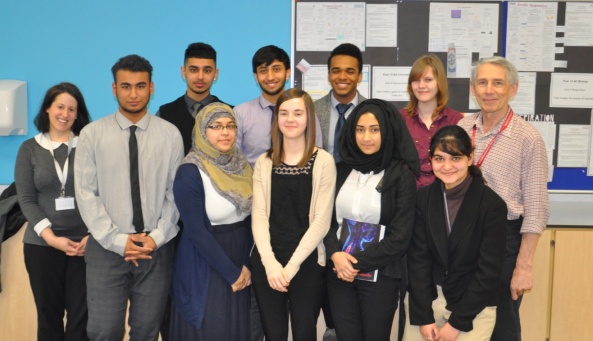 A group of Bedford Academy students together with their science teacher. There’s also a bloke who’s wandered over from Cambridge, though you may have trouble spotting him.

The audience was great – they really tried to contribute to the lecture and asked good questions and were hugely appreciative, after which a group of sixth formers showed me round the science department. And stunning it was. If you were trying to persuade someone to go into teaching you couldn’t come up with a more attractive set-up. A wonderfully open layout with lots of comfortable communal space and every state-of-the-art support you could ask for. Their students are going to find a few of our universities a bit of a let-down. So all told I came away thoroughly uplifted (and yes, that is from Bedford!). The next time I come across doom-laden tales of British education I’ll recall my unexpectedly enjoyable morning at Bedford Academy where the final touch was that all the pupils I met, as well as being quietly enthusiastic, could not have been more charming and polite. And I made it back for a lunch  the more enjoyable for the thought that we are getting some things right in our schools.