It has been famously said, though no one quite knows who gave first utterance, that England and America are two nations divided by a common language. In deference to readers from the US of A, therefore, we need a word about English before we embark on the current topic. You can get quite a long way in the States on an English accent, partly because the inhabitants are, by and large, very tolerant and cosmopolitan souls and also because they perceive Brits as being rather weird but harmlessly entertaining – at least since they gave up the idea of owning America, signed the Treaty of Paris and slung their hook. But that last phrase is an example of how things can get sticky when you talk to an American audience and it slips your mind that 1783 was quite a long time ago – long enough in fact for a good deal of divergent language evolution. Put another way, use idioms unthinkingly and you can die the death – leaving your listeners wishing that you would indeed sling your hook (American translation: beat it). One of the odder things about this linguistic separation is that American doesn’t have a good phrase that means gently making fun of someone. You can pull a Yankee leg it is true and you may mess them about – but that one’s really fraught as it carries a different innuendo in English. So it’s a pity that over there you can’t extract the Mick, take the Mickey or remove the Michael. It’s deeply regrettable that this phrase probably owes its origins to Cockney rhyming slang referring to the act of urination but strawberries grow in manure and all that. Similar pratfalls work in the other direction, of course, and British audiences are likely to look blank if you mention your keister: start talking about booty and mussing with someone and they’ll really be baffled.

To the current topic. We saw in Mission Impossible that many different pathways pass signals saying ‘grow’ from the outside world to the nucleus at the centre of a cell. Many of these relays use RAS proteins – they’re a major junction in the cellular network so they’re a very tempting target for disruption of signaling. But if all roads lead to Rome, so to speak, is there not an even better target – a main gate, the critical portal through which everything that drives cell proliferation must pass? There is and it’s called MYC (pronounced ‘mick’ – Ah! Now all is clear!!), the gene encoding a protein of the same sound that is a unique master regulator. MYC coordinates the expression of a large panel of genes involved in cell growth and division – it’s essential for cell proliferation. 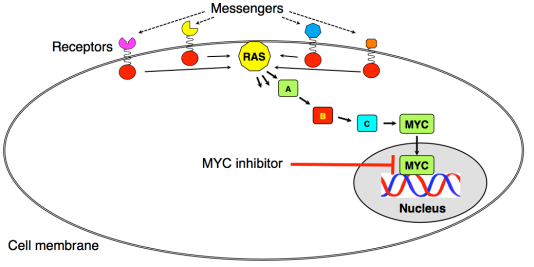 Cell signaling. Many messengers turn on lots of relays that focus on the nucleus telling cells to grow and divide. The MYC protein is a master coordinator.

But there’s an obvious problem: to survive we need to make new cells all the time – about one million every second, just to maintain the status quo. It seems hardly worth pointing out that if you gave someone a drug that blocked MYC it would be fatal: the body simply couldn’t survive for very long with a blocked cell production line. Indeed it’s been known for some time that knocking out the MYC gene in mice is fatal: they fail to develop beyond an early embryonic stage. And yet there’s a huge temptation to ask ‘What would inhibiting MYC do to tumors: might it actually kill them?’ – a curiosity fuelled by the knowledge that MYC is deregulated in most – perhaps all – cancers. That is, an almost invariable upshot of the mutation patterns found in tumors is that excessive amounts of MYC protein are made – and, as it drives cells round the cell cycle and into division, more MYC equals abnormal cell growth, aka cancer.

So, in an experiment that all logic said would not work, Gerard Evan and his colleagues in San Francisco and Cambridge devised a way to switch on an inhibitor of MYC in transgenic mice to ask the unaskable: ‘Is blocking MYC fatal and, if is isn’t, what does it do to tumors?’ The method is to use a trick of genetic engineering to give mice a novel gene that is switched on by dosing them with a drug added to their drinking water. Omitting the drug switches it off. The gene encodes a protein that sticks to the MYC protein and prevents it from interacting with its normal partner so that the dynamic duo that drives cell growth can’t be formed.

The results were startlingly dramatic. First of all, MYC blockade didn’t kill the mice although it certainly had some effects. A shaved patch of fur doesn’t re-grow quickly as it normally would and males become infertile because they can’t make new sperm. But the mice aren’t aware of these little problems and in general are as full of beans as their chums with normal levels of MYC activity – and in any case these mild effects are reversible. Switch off the MYC block and they return rapidly to normal.

That was surprising enough but the really staggering result came from introducing the MYC blockade into mice that develop lung tumors (driven by the expression of a mutant RAS gene). Inhibition of MYC has an almost immediate effect on tumor size: tumors regress and the side effects remain mild and reversible. A single burst of MYC blockade results in a significant extension of life span for tumor-bearing mice. Even more remarkable, successive episodes of MYC inhibition (a ‘metronomic’ regime) leads to the gradual eradication of the tumors – and the elimination of lung cancer means that the mice now have a normal life span.

It should be emphasized that so far this has only happened in mice and the Appian Way of cancer therapy is littered with the corpses of brilliant ideas that worked a treat in those wonderful little models but were utterly useless when it came to humans. However, science is the practice of eternal optimism and there are sound grounds for hope here. Switching a gene on and off by genetic engineering is fine in mice. It won’t do for us but already some small molecule inhibitors have been made that appear to work in mice. The hope is that both the anti-cancer effect and the mild side-effects will be recapitulated in humans – and that, because all pathways do indeed lead to it, taking the MYC out of cancer will kill tumours. Then the really optimistic bit – that even crafty cancer cells will be unable to find a way round such a block. Because all proliferation signals lead to MYC there will be no adaptive mechanism to which cells can turn to ensure their survival.

In short, the tumour will be stuffed – which rather brings us back to where we started except that, having taken the MYC, this needs no translation.