A long, long time ago – 25 years to be precise – I was lucky enough to work for a few months at The University of New England in Armidale, up on the Northern Tablelands of New South Wales. And jolly wonderful it was too. You could see grazing kangaroos from my lab window and I got to play grade cricket! To anyone who’ll listen I can still describe in vivid detail the scoring of my first run in Oz. We’d won the toss and … (that’s quite enough cricket, Ed).

Equally wonderful is the fact that, in part courtesy of The University of Queensland, I’m going again to Oz – this time to do what I didn’t manage then: visit all the major cities. We begin in Brisbane this week giving a lecture in the U of Q’s Global Leadership series (yes really!), explaining the biology of cancer to an audience of largely non-scientists – at least I hope I’ve got the right brief! We end up in Perth in May having, in between if I can stick the pace, given a variety of talks and seminars to the general public, to schools and to cancer research institutes in Sydney, Melbourne and Adelaide. How good is that? Being invited to warble on about one of your favorite subjects whilst touring Oz? Wow!

All of which makes you think a bit about Father Time and what has happened in the interim. Answer quite a lot, of course. Collapse of communism, collapse and resurgence of Australian cricket (that’s your last warning, Ed) and so on but we’re supposed to inform and enthuse about cancer here so how’s that faired, particularly in Australia? Well, in the year I first followed Captain Cook (watch it, Ed) onto the shore of Botany Bay about 60,000 Australians were diagnosed with cancers of one sort or another and some 30,000 died from these diseases. At that time one in three men and one in four women would be directly affected by cancer in the first 75 years of life.

And now? This time round the estimated numbers are 128,000 and over 43,000 with one in two men/one in three women discovering they have cancer by time they’re 85. All told, cancer accounts for about three in ten Australian deaths – much the same contribution as heart disease. To add to the gloom the numbers are going up not down so the prediction is 150,000 new cancer cases in 2020.

Not a lot and no surprise

Well, you may be thinking, no change there then – or even I told you so. After all, I’m forever in these pieces elaborating on current cancer stories holding forth about how slow is the progress of science: one step forward, two back, more of a shuffle than a step really, and so on. Or as Martin Schwartz more eloquently puts it, describing science as the art of productive stupidity – being ignorant by choice. This follows almost inevitably from the nature of research because working on what we don’t understand puts us in the awkward position of being ignorant. As Schwartz has it, one of the beautiful things about science is that it allows us to bumble along, getting it wrong time after time, and feel perfectly fine as long as we learn something each time. That’s why I keep telling you to ignore the “great breakthough” newspaper headline dribble – that’s just the hacks trying anything to persuade their editors to give them space to promote themselves.

But wait a mo.

All that sounds consistent with the signs that things in Oz have been going backwards at a rate of knots over the last 20-odd years. But hang on. As ever, bare stats can be a bit misleading (remember what Disraeli said). Thus although around 19,000 more people die each year from cancer than 30 years ago, this is due mainly to population growth and aging – Australian life expectancy has gone up by over four years since 1990 (it’s now 82). The death rate from cancers has fallen by more than 16% and the survival rate for many common cancers has increased by 30 per cent in the past two decades. So that’s great: terrific ad for living in Oz and something of a triumph for medical science.

A sunny side in Oz?

What’s more you can put a positive twist on even the gloomy side of the picture by noting that, if indeed there’s strength in unity, Australia’s trends are much the same as everyone else’s in what we like to call the developed world. Well sort of but there’s a serious negative for Australia Fair, as you might put it, something that sticks out like a sore thumb (or an itchy mole) when you glance at the stats. Between 1980 and 2010 the incidence of skin cancer has shot up in Australia by around 60%. The most common type is non-melanoma skin cancer – usually treatable as it generally doesn’t spread around the body. The nasty version is malignant melanoma – which does metastasize, although is essentially curable if caught before some of its cells escape from the primary site. And the really bad news is that it is now the third most common cancer in Australians and in those aged 15-44 years it is the most common cancer. In 2012, over 12,000 Australians were diagnosed with melanoma and it killed over 1,600. This disease is usually set off by ultraviolet light from sunlight (or sunbeds) damaging DNA (i.e. causing mutations) and you will not have missed the allusion to the fact that people with fair skin (or blue or green eyes/red or blond hair) are most at risk.So the current Oz figures are a bit of a blow to Richie Benaud’s campaign of which I made great play in Slip-Slop-Slap Is Not Enough. 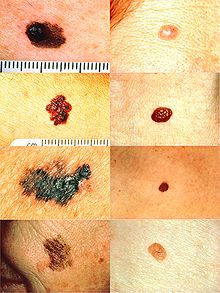 ABCD rule illustration: On the left side from top to bottom: melanomas showing asymmetry, a border that is uneven, ragged, or notched, coloring of different shades of brown, black, or tan and diameter that had changed in size. The normal moles on the right side do not have abnormal characteristics (no asymmetry, even border, even color, no change in diameter).

Meanwhile in the lab?

It’s pretty sobering for me to reflect that it was only a few years before I went to Oz that the first human cancer gene (oncogene) was discovered. That was RAS, detected in human cancer cells in 1982 by Geoffrey Cooper at Harvard, Mariano Barbacid and Stuart Aaronson at the NIH, Robert Weinberg at MIT and Michael Wigler at Cold Spring Harbor Laboratory. Between then and 2003 several hundred more cancer genes were identified in a huge frenzy of molecular stamp collecting. Then came the human genome sequencing project and in its wake analysis of tumours on a scale and level of detail that is almost stupefying and would have been unimaginable before 2003. To appreciate the mountain of cancer data that has been assembled over that period, screen the literature data base for research papers that have ‘RAS’ in the title: that is, contain significant info relating to that gene. Answer: 76,000. That’s seventy-six thousand separate pieces of research that have made it through all the peer review and editorial machinery to see the light of day in print. And RAS, massive player though it is, is not the biggest. Do the same check for a gene called P53 and the number is: over 145,000!!

Confused? The plot so far …

First up we noted that the cancer burden in Oz has got a lot heavier over the last 25 years, then we reminded you that advances in science are of the snail-like variety – so you shouldn’t be surprised when things seem to go backwards. But, flipping to the other hand, we trotted out another set of figures saying things have actually got much better (life expectancy and cancer survival rates have steadily climbed). Though, switching hands again, melanoma’s gone through the roof. However, going back to the first hand, if we can still locate it, we noted the massive explosion in the facts mountain of cancer biology for which the blue touch paper was only lit about 25 years ago.

And your parliamentary candidate is …

What with all this sleight-of-hand, flip-flopping and U-turning, it occurs to me that I’m shaping up rather well as a prospective politician. I’m quite taken with the idea, especially as if I stood as an MP in my own constituency I’d be up against Andrew Lansley who, as you’ve probably forgotten, was once upon a time Secretary of State for Health. Being a virtuous and helpful soul, when Betrayed by Nature came out I sent him a copy as a gift, a freebie, – figuring that, as a career civil servant and politician who’d become responsible for the nation’s health, he might find it useful to read a basic primer on something that was killing 150,000 UK citizens every year. Thoughtful, you’d say? Indeed. Did I expect to find him on my doorstep next day gushing gratitude and thirsting for more knowledge? Maybe not, even though he only lives round the corner and we have actually met in the dim past. But at least one might have received a note – a one line email, perhaps – from his PA, who can scarcely be too busy to be polite. But no. Nothing. Zippo. So I came up with a brief sentence that summarised my take on this example of voter wooing, or indeed plain good manners, but I can’t remember it now – for the best perhaps. What is it the Bible says about getting narked? Something along the lines of “whoever says, ‘You fool!’ shall be liable to the hell of fire.”

So thank heavens we’ve side-stepped that but nevertheless, Andrew, it really would be a joy to give you a bloody nose – electorally speaking, of course – so let’s just give those credentials one more buffing. We started by lowering your expectations of science with the reminder that things proceed at a snail’s pace {you do realise that common analogy is very unfair on snails? Scientists have shown they can bowl along at a metre an hour (yippee, we do discover things!) – not much slower than your average supermarket trolley-pusher, but here’s the thing. Snail’s pace means they can get round the garden in one night. That’s the whole of their world covered in one go – without mechanical assistance!! Not so slow after all, eh?}. But the flip side is that the genomic era has already seen the development of a number of drugs that are effective against malignant melanoma. They’re not perfect but at least they take us a step further in dealing with this cancer once it has spread around the body.

(That’s quite enough politics, Ed). OK. Let’s abandon a promising career and go back to being a scientist with a typically punchy summary. Australia’s wonderful but when it comes to cancer it’s not much different to any other rich country (not really a flip that, just a statement of fact). Folk are living longer so, of course, more of us will ‘get’ cancer but we seem to think that longevity buys us more time to smoke, booze, burn ourselves pink and eat crappy food. Medical science is doing wonders in detection and treatment: at nearly $400 million a year on cancer research, almost a quarter of all health research expenditure in Australia, it jolly well should. But if we don’t do more to help ourselves the cancer burden is going to overwhelm health resources not just ‘down under’ but all over.